Most truck drivers and pilot car operators likely give little thought to the radios in their vehicles. As long as they can key a mic and broadcast a message, everything seems to be 10-4.

That’s leading a transport communications consultant to raise the alarm about those who use AM-based CBs or VHF radios with poorly shielded wiring, or use VHF channels outside regions where they’re allowed.

While ELDs need to be certified by Transport Canada to meet a soon-to-be enforced federal mandate, the approval process doesn’t include the potential challenges of radio frequency interference (RFI) and electromagnetic interference, James Cooper explains. This means the simple act of keying a 25-watt radio can interfere with the connection between the ELD and a truck’s onboard computer.

“Transport Canada has simply authorized software on an ELD. They have not put out any paper or recommendations on hardware compliance,” he says.

How does RFI interfere with electronics?

“RF or electromagnetic energy produced by two-way radio or even cellular transceivers in close proximity of an ELD hardwired to the vehicle would be like placing a cell phone on the keyboard of most laptops. Call the phone and watch what happens,” Cooper explains. “This is a low-power transceiver interacting with a partly shielded computer keyboard connected to the main mother board.

“Increase the power and come closer to the ELD’s own clock speed and the problem becomes far more apparent — as it does with two-way radios interfering with truck and bus dashboards using unshielded ribbon cable connections that act as an antenna.”

And a lot of onboard safety equipment continues to use low-frequency clock speeds.

Daniel Boyer of BDR Safety Consulting in Winnipeg recently came across the post by a pilot car operator who complained about yellow lights being triggered whenever a mic was keyed. That reminded Boyer of his time with the RCMP, when radar units had to be installed with double-shieled coax to combat any potential interference.

“We’ve got people that are plugging into the ECM and shoving a Bluetooth receiver on the dash,” he says of some ELD installations, adding that such wires may be running just a few inches from key electronics. “Is there a possibility that when the ELD decides to talk to the ECM that you get a spike somewhere and you’re activating your collision mitigation system?”

He’s certainly seen plenty of examples of problems in logging trucks, where jerry-rigged wiring turns on flashing lights or interferes with radio communications.

Another challenge that certainly raises the ire of emergency personnel and federal communications regulators involves truckers and pilot car operators who use banned frequencies or fail to secure licences for their VHF radios.

For example, many pilot car operators in Western Canada – looking for an alternative to AM radios that can speak over long distances but not reach the other side of an intersection – switched to Appendix B1 VHF frequencies. But these are supposed to be limited to specific geographic areas.

To compound matters, VHF radios require a licence, Boyer says. And he received a dozen calls after federal regulators ran a recent inspection blitz in Alberta. “People are using the VHF frequency wherever they want and whenever they want, and most of them are not licensed.”

“The B1 Appendix has drifted into being a general VHF CB in Canada, with everyone from the originally intended safety communications for truckers in the West becoming a free-for-all of campers, backpackers, hikers, recreational vehicles, hunters and many more,” Cooper says.

The LADD (Logging ADministration Dispatch) channels are also restricted to specific regions. If used further afield, they run afoul of the rules.

“We’ve got pilot operators that are running along the border … they’re getting yelled at and screamed at by emergency services,” Boyer says, referring to complaints about the radios interfering with emergency services.

Even B.C. regulators stumbled into the rules close to a decade ago when they published guidelines for pilot cars and suggested the Appendix B1 radios could be used everywhere, Cooper says. Innovation, Science and Economic Development Canada corrected them on that.

A potential solution to all of these problems could be found in CB radios equipped with FM modes.

The U.S. Federal Communications Commission adopted the European CEPT AM/FM CB in the last two years, and Canada added its approval in September, Cooper says, noting that four models have already been approved for sale.

“There are millions of AM CBs out there, but these are easily interfered with by skip, poor squelch settings, background noise, and limited noise blanking,” he says. “In FM mode, this radio behaves very much like its higher-powered commercial cousins but is licence-exempt throughout North America.”

“Another good feature on the newly approved dual-mode CB is it is a direct swap for already-installed AM-only models and isn’t going to cause issues with onboard computers and ELD systems in trucks, which poorly installed VHF radios can,” he adds. Most trucks have “plug and play” connections to support the dual-mode CBs, and the factory installed wiring protects against interference.

The FM signals offer better clarity and about the same range as a 25-watt VHF radio, Cooper says, noting approved devices are listed on the government’s Radio Equipment List.

He just warns against buying anything off the internet without a bit of research.

“Some models offered are foreign versions which not only are unapproved but may be operating on frequencies not allowed in North America.” 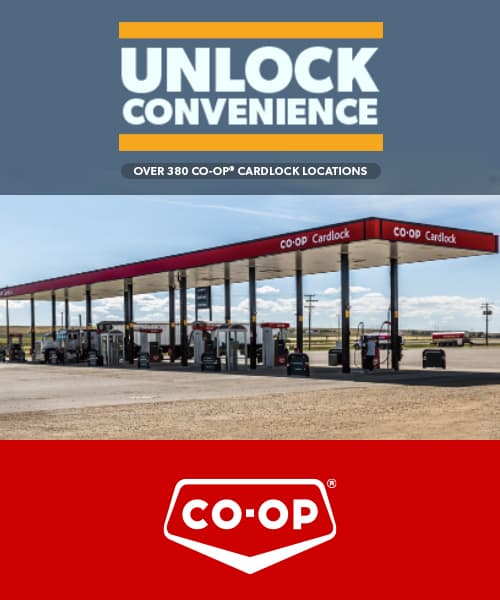